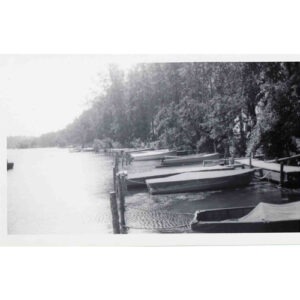 The Feather is an observation platform overlooking a wetland on Leo’s Landing within the peninsula.  This is a great location to view shore birds, waterfowl, and many native aquatic plants.  This platform was once destroyed by the only recorded tornado (F0-scale) on the peninsula.  The platform was rebuilt, where you can now find an interpretive panel that tells the story.  This area, known as Leo’s Landing, was named after the owner of a boat rental marina called Leo Hess Marina.  This boat rental facility operated in the late 1930’s into the 1950’s.  This photograph was taken in the mid 1940’s of the marina.