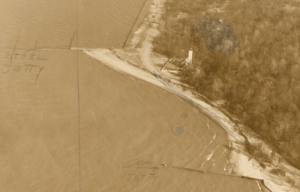 The Presque Isle Light House was built in 1872 and in operation by 1873, guiding mariners around the hazardous point of the peninsula into the main harbor of Erie. This aerial photograph was taken in 1948, showcasing the road that was extended past the Light House in 1927.  The road was later washed out by a storm in 1946 and in 1948 work began to build a new road south of the light house, which is the road we drive on today. The Light House is now open for public viewing.